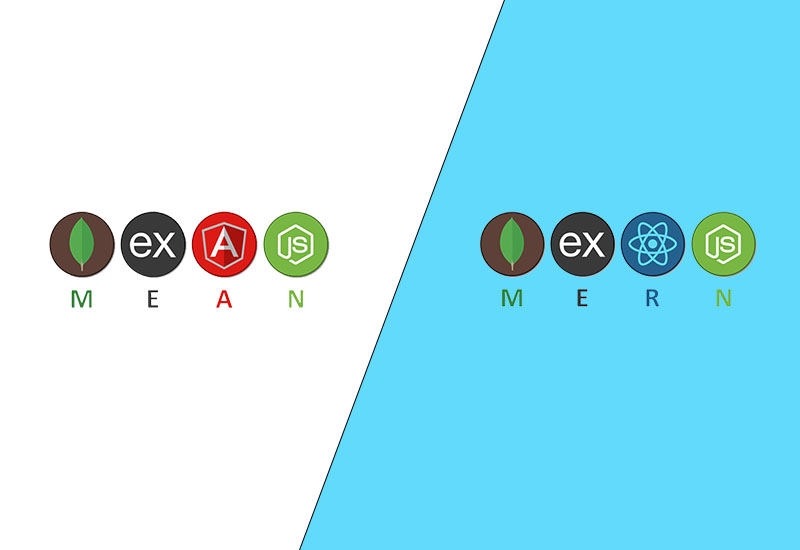 Nowadays, the majority of websites are built with widgets for quick loading, increased interaction, and enhanced mobile-responsiveness. Today, the developers use a ‘stack’ of technologies to provide you with a seamless website or application.
On the business side, developers are also under significant pressure to develop DevOps methodologies to deliver new applications rapidly while rolling out enhancements and updates regularly. But, it doesn’t stop here as there is a continuous requirement to ensure high availability simultaneously. As a result, it can be inferred that the evolution of web development has been accelerated by the demands of the end-users.
Therefore, the common approach of combining JavaScript, CSS, and HTML is no longer sufficient. For meeting the web audience’s needs, taking advantage of a web stack proves to be a perfect solution.
There are some used by developers, but the dominant ones are:

You don’t know what a stack is or their different types? Don’t worry! We got you! Apart from discussing MEAN stack vs MERN stack in this blog, we will be talking about the basics too.

Common benefits MEAN and MERN stacks share are the ease of implementation and flexibility. Applications are built upon the Model-View layout. MongoDB is a popular and valuable database commonly used in both the stacks. Node.js allows developers to build advanced back-end apps through the running of JavaScript on the server-side. And Express.js, in its turn, is used to manage HTTP requests, provide basic routing, and to produce an API

Both MEAN and MERN:

What is MEAN Stack?

Mean Stack is one of the fast-growing open-source development frameworks that help developers to develop a complex web application very easily and quickly. In layman’s terms, MEAN is a full-stack in JavaScript used to speed up the development process. MEAN stack developers are in great demand because MEAN allows developers to reduce the time needed to manage the system and enables faster development of APIs. MEAN Stack is a combination of MongoDB, Express.js, Angular, and Node.js technologies to develop web and mobile apps. These technologies are JavaScript based, used to build complex websites and web apps.
MEAN stack development companies can easily transfer code written in another framework using the MEAN stack. MEAN is flexible and lets developers test an app on a cloud platform. Developers can easily make changes where required and can implement testing.

WHAT IS MERN STACK?

Just like Mean Stack, Mern Stack is a combination of technologies that consists of MongoDB, Express.js, React.js, and Node.js. All the four components of Mern Stack provide the developers with an end to end framework to work.
All the technologies in MERN Stack are free and open source. Also, MERN Stack is backed by a huge community of developers to help you out wherever you get stuck. Again, the MERN stack also covers the complete development cycle – starting from frontend development to backend development. MERN stack supports the MVC architecture which makes the development process hurdle free. The MERN Stack comes with a set of pre-built exclusive testing tools. React is a library. It is better than a framework because frameworks have their set ways of doing things. On the other hand, a library provides you with the tools to develop your application. An experienced developer can craft his application with the help of a library as there is complete freedom to choose from the library’s functions.
The MERN stack is increasingly popular and is a powerful stack to work in. If you’re able to build and deploy good MERN applications, it will greatly help you

THE MEAN VS MERN STACK- How To Make The Right Choice?

The basic difference between MEAN Stack and MERN Stack is React.js and Angular.js. Most of the developers prefer to React over Angular today. The selection of the MEAN/MERN stack depends upon the development and functional requirement of the system to be developed. If you have several developers and are going full-on enterprise product, you will go Angular. For example, an enterprise-level project like LinkedIn preferred MEAN stack. The major reason behind this is to maintain the architecture.
Although the MERN stack makes UI rendering considerably simpler, it is just a library. It just provides the means to make rendering easy. On the contrary, Angular provides a well-organized framework to support MVC architecture or rather MVW (Model-View-Whatever) architecture where the database and UI code are isolated with an intermediate layer. This helps in managing the code easily and making upgrading of code an easy task. Thus, when it comes to adding features to the application, React involves additional configurations while Angular is well organized to make it a plug and play job. So when it comes to Enterprise-level architecture.
Everyone should remember that React is indeed very different from Angular. If you aren’t already used to flux architecture and unidirectional data flow, then React can be difficult to pick up. It also uses JSX which takes some time getting used to if you’re coming from traditional HTML. Angular is a bit easier for developers to jump into because it follows the familiar MVC pattern. To put it simply, if you like more traditional JavaScript and feel comfortable with flux architecture then React is your cup of tea. If you like more opinionated frameworks and a set organizational style Angular will be more your thing. Taking into account the mobile application development, using the MEAN approach includes availing the strong capabilities of the Ionic framework whereas the implementation of MERN is best benefited by the use of React Native.

For large enterprise projects MEAN stack scores over MERN, because of the need to maintain architecture. MERN stack development services offer easier UI rendering, but that’s the only advantage. On the contrary, MEAN, with AngularJS provides a very well-organized framework to support an MVC architecture where the database and UI code is isolated with an intermediate layer. This makes it ideal for enterprise-level architecture. MEAN stack developers can easily manage the code and also upgrade changes when required. This helps in managing and upgrading the code an easy task.
When it comes to the enterprise-level application of stack, LinkedIn chose Mean over Mern. The reason being the maintenance of an architecture. Even though Mern makes UI rendering quite simple, it is after all only a library.

Web app development companies tend to use several third-party libraries for building large-scale applications. Since Angular is a framework, and a robust one at that, it comes with ready to use features that make it easier for MEAN a stacked development company to use third-party libraries. It also supports “$http” calls to connect to the back-end server, unlike in the MERN stack where React requires additional libraries to support these calls.

With wrapping up this blog, we could conclude that both MEAN and MERN stack are reliable frameworks for rapid front-end development. They result in light-weight JavaScript applications. Compared to the MERN stack, the MEAN stack is a better option for large-scale applications while the MERN stack leads the race in the faster development of smaller applications. However, both stacks have their own set of benefits and drawbacks. The MERN stack, however, is becoming more popular as web developers are preferring MERN over MEAN. By hiring a MERN stack development company, or a MEAN stack development, you can build social media websites, analytic tools, browser games, API web solutions, e-commerce websites, and a lot more. However, the major difference lies in the way it is structured. MEAN has been around for a longer time as compared to MERN. People are slowly learning about the benefits of choosing MERN for their projects. As mentioned earlier, the basic difference between the two is Angular and React.
Some famous companies using Angular are NASA, HBO, Nike, and YouTube. The famous companies using React are Uber, Dropbox, Instagram, PayPal, Netflix, and Flipkart.
Are there some technical questions in your mind about MEAN and MERN?
Leave your comment here.
Contact us and our team will get back to you soon!